On April 9, UC Santa Cruz's Student Union Assembly (SUA) joined four other UC campuses in passing a resolution for divestment from fossil fuel assets in the $6.5 billion UC General Endowment Pool. These declarations in the UC system are part of a movement happening on college campuses that seeks to eliminate investment in fossil fuels, which contribute to greenhouse gas emissions, global warming, and in the words of 350.org founder Bill McKibben, "a catastrophe."

In July McKibben, published an article in Rolling Stone magazine titled "Global Warming's Terrifying New Math." The article laid out, in laymen terms, the cost of business as usual. 350.org summarizes, "It’s simple math: we can burn less than 565 more gigatons of carbon dioxide and stay below 2°C of warming — anything more than that risks catastrophe for life on earth. The only problem? Fossil fuel corporations now have 2,795 gigatons in their reserves, five times the safe amount. And they’re planning to burn it all — unless we rise up to stop them." 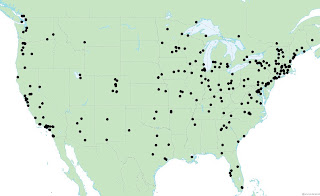 Fossil Free, a partner of the international organization 350.org, has college campus campaigns at locations pictured on this map.

The McKibben article kicked off a global movement of students across the country who have organized to urge their University to eliminate assets from fossil fuel companies. Other California schools who have passed student government resolutions to divest include UC San Diego, UC Santa Barbara, UC Davis, and UC Berkeley.

UC Santa Cruz’s resolution “instructs asset managers to stop any new investment in fossil fuel companies; to take appropriate steps to ensure that, within 5 years, none of its directly held or commingled assets include holdings in fossil fuel public equities and corporate bonds as found on the Carbon Tracker list; and to release quarterly updates, both detailing progress made towards full divestment and providing information on the holdings of the endowment pool and of index funds within the GEP [General Endowment Portfolio]."

"Therefore, let if be resolved that the Student Union Assembly of UC Santa Cruz call upon the Regents of the University of California, in its commitment to leadership in sustainability, to take the following actions regarding the General Endowment Pool:

The next step comes this spring when, “during the UC Regents Meeting, campuses around California will [organize] to [advocate] for a statewide change of the UC investment portfolio to divest from fossil fuels,” explains David Shugar, Chancellor's Undergraduate Intern for the Education for Sustainable Living Program (ESLP) and co-representative of UCSC for the California Student Sustainability Coalition who has helped with the UCSC campaign.

Students at UCSC kicked off their divestment campaign with a teach-in on April 15th. Hosted by ESLP and featuring the Sierra Club the event was powered by clean, renewable energy from a bike generator. Quentin James of the Sierra Club spoke about money power and people power, asking the group why they thought people power was stronger. Fourth year student Anneliese Harlander responded "Money's just paper, people got soul!" 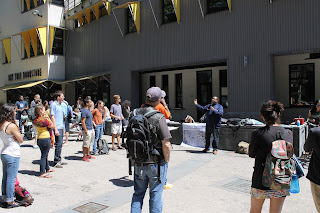 First year student Jeremiah Tsyporin remarked at the teach-in, "If the UCs are successful with divestment, how empowering is that to go to a school where we've allocated resources away from fossil fuels! We've got to show students the progress that other students are making, and this will lead them to realize 'oh, yeah, I can actually get things done, too.'"
Posted by Melissa Ott at 3:38 PM

Is there a list of fossil fuel companies the UC has invested in?

Wonderful!
Now, lets get UCSC to DIVEST FROM FOSSIL FUELS!