Here are the highlights of her presentation, as they relate to UCSC sustainability work.

She began by explaining: "I’m here today to talk to you about what we at the University of California have done, are doing, and what we can do in the future, to advance the cause of protecting the planet in a way that ensures a robust future for generations to come. [...]

"A dozen or so years ago, UC students wanted to make a big change. They were energized with a sense of purpose and public service. The 2001 California energy crisis, and its fallout, loomed large in the media. Decisions about the Arctic National Wildlife Refuge and the Kyoto Protocol were playing major parts in the national conversation on climate change and the environment.

"UC students looked at the world around them. They decided that now was time to heed that old mantra—'think global, act local.' First came the campaign known as “UC Go Solar”. It was time, the students demanded, for UC 'to practice what it teaches.' Student governments on every UC campus passed resolutions. They called on the Board of Regents to establish a clean energy and green building policy. In 2003, the regents—unanimously—did just that.

"Next, at seven UC campuses, the students charged themselves extra fees to fund sustainability efforts. Some of those campuses used that funding to establish competitive grants for sustainability programs. Others used the money for different efforts. Solar photovoltaic installations at UC Riverside. A Carbon Fund at UC Santa Cruz."

"At UC Santa Cruz, the Provost sponsors sustainability interns. They research everything from food, to landscaping, to purchasing, all to help the campus achieve its own sustainability goals." 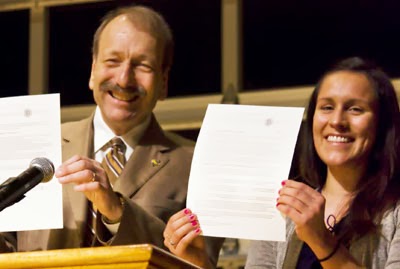 "UC has 143 LEED building certifications. Twenty-three of them were awarded in 2013. Our medical centers save millions of dollars a year through waste reduction and energy efficiency. Zero emissions buses drive across our campuses. Five campuses and two medical centers have already surpassed the 2020 goal of procuring at least 20% of their food sustainably."

She ended her speech with the following note about the future of sustainability at the UC.

"In my experience, these sorts of movements are built from the bottom up. That’s how UC students built this movement at the beginning. In the end, however, state and university leaders, together, have to take the baton and run the final lap.

"So let me say loud and clear that the University of California is at the track, warmed up and ready to run.

"Fiat Lux, or 'Let There be Light,' is the motto of the University of California. It offers a suitable grace note for ending speeches like this one. To you, today, however, let me amend it to this:

To learn more about the sustainability initiatives President Napalitano has announced in recent months, please click here.
Posted by Melissa Ott at 3:22 PM